The Glenn H. Curtiss Museum is among the most notable aviation museums in the United States due to its focus on the accomplishments of Glenn H. Curtiss, aviation pioneer and early motorcycle manufacturer. The museum includes a sizeable collection of early aircraft and motorcycles, which illustrate the innovative genius of Glenn Curtiss.

The centerpiece of the motorcycle collection is an exact reproduction of the famous 8-cylinder motorcycle which earned Curtiss the title of "Fastest Man on Earth" in 1907 with a land-speed record of 136.4 mph.

Including originals and reproductions, some of the highlights of the museum's collection of 22 historic aircraft are: the June Bug, in which Curtiss made the first officially-observed, one-kilometer flight on July 4th, 1908; the 1909 Silver Dart, the first airplane to fly in Canada; a 1911 A-1 Triad seaplane, the U.S.Navy's first airplane; a 1913 Model E "Flying Boat"; a 1917 Jenny, a ¾ scale P-40E "Warhawk"; and at the museum entrance at the highway, is a 1943 C-46 "Commando" WW II transport. 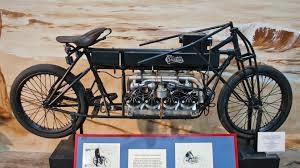