The Eagles Mere Auto Museum is a result of a life-long passion for automobiles. As a child, the founder would pour over the hotrod magazines in the grocery store. He collected match box cars throughout his childhood and had an impressive collection by the time he was a teenager. On the eve of his 16th birthday, a friend’s 1968 Chevy Chevelle caught his attention. He ultimately paid $600 for the car and subsequently spent every waking hour and most of his working money towards the restoration of that car. Still his fondest automobile, it is featured on one of the turnstiles in the museum today. Every vehicle in this collection of over 500 shares a connection with him: pick-up trucks from his days as a boy scout; the “Class of 69” Camaros which were the cars so popular for high school seniors at the time; or his collection of Woodys which reflect his friendship with an older neighbor. Meticulous about restoration and preservation, his passion for the automobile is transparent throughout the museum. 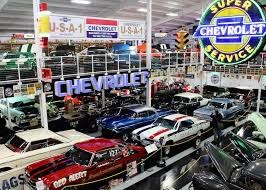